The Kansas Board of Regents has approved new admissions standards for the University that no longer require incoming freshmen to submit standardized test scores. First-year students will now be assured admission to KU if they have:

According to Matt Melvin, vice provost for enrollment management, COVID-19 helped drive the revision of KU’s admissions criteria. “The pandemic forced our hands, and it forced the hands of most schools across the country,” he says, explaining that the widespread closure of standardized test sites prevented many students from taking the exams. “It forced institutions to do what a lot of schools were looking into anyhow—decreasing emphasis on standardized test scores.” 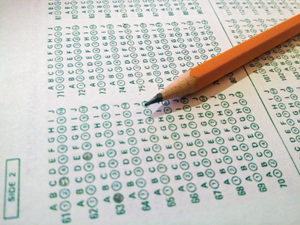 The new policy helps ensure that the University’s admissions process is as fair and equitable as possible, regardless of a student’s background.

Over the past year, several university systems in the United States, including those in California, Oregon, Colorado and Illinois, have moved to test-optional standards for admissions, allowing students to choose whether they submit ACT or SAT scores. Some institutions have gone a step further and become test-blind, meaning that even if students submit exam scores, those scores aren’t considered in the application process. KU’s test-optional pathway allows the University to remain competitive in attracting out-of-state students.

“The market shifted, and one of the things we talk about at KU all the time is, ‘How can we maintain that we are in equilibrium with the market?’” Melvin says. “That really was a driver.”

The new policy also helps ensure that the University’s admissions process is as fair and equitable as possible, regardless of a student’s background. In recent years, Melvin explains, high school students have often taken the ACT or SAT multiple times and even enlisted coaching services to obtain higher scores—critical advantages for some but not all students. By eliminating the test requirement and putting greater emphasis on GPA and the academic intensity of a student’s high school curriculum, “It levels the playing field a bit,” he says. “It looks at
the success of a student over the course of their academic career in high school versus how they did on a Saturday morning.”

Though standardized test scores are no longer required, Lisa Pinamonti Kress, director of KU Admissions, still encourages students to take at least one of the exams, reminding them that the score may be helpful for placement into courses or for scholarship purposes. But she admits that not having to continually chase a high score is a relief for many students and their families. “I know students are certainly excited about not having to retake the test,” says Kress, g’98. “If they have the GPA, they have the confidence of knowing they’re getting in. Some students are super-successful at GPA and they take the test and they’re like, ‘Oh, it’s not the score I want,’ and they kind of feel pressured to keep taking it.” But with KU’s new test-optional policy, students are required to report only their GPA and, if they want, their test score. “If you meet the requirements you’re admitted within 48 hours,” Kress continues. “If you don’t, we review your application and it takes another seven to 10 days to hear back. I think it eases up the stress of retaking that test.”

Melvin, who for years has advocated that GPA is the best predictor of student success in higher education, hopes the new standards ultimately will boost student enrollment and retention. “Our admissions requirements aren’t designed to keep people out,” he says. “That’s never what we’re about. Our admissions requirements were designed to say, ‘Can we predict success in college? Can we predict success at KU?’ That’s what we’re about.

“Over the next year or two, we are clearly going to start looking at how are these students doing in terms of their academic performance, their academic progress from term to term, their success rate with certain courses, their retention rates. There becomes a whole opportunity for an assessment to say, ‘Are those variables that we’re collecting predictive of success?’ And I think that’s going to be the next round of research that we do.”