The School of Medicine and the School of Pharmacy completed successful national searches this summer with the appointment of new deans.

Akinlolu Ojo will join KU as executive dean of the School of Medicine Aug. 26, overseeing the Kansas City, Wichita and Salina medical school campuses. Currently associate vice president for clinical research and global health initiatives and professor of medicine and health promotion sciences at the University of Arizona, Ojo is a nephrologist with clinical and research interests that include chronic kidney disease and kidney transplantation. He has more than 200 peer-reviewed publications and $95 million in current grant funding.

Ronald Ragan, p’84, g’97, PhD’98, will become dean of the School of Pharmacy on Aug. 1. Ragan started his academic career as an adjunct professor at KU in 1997, and served as the school’s associate dean for academic affairs from 2004 to 2012. He is the founding dean of the  School of Pharmacy at High Point University in North Carolina, which he helped launch in 2012, overseeing growth of the new program to 189 students and helping design the school’s $120 million facility.

The change—perhaps “expansion” is a more precise term—is meant to more accurately represent the current student population and curriculum, which has transformed since the school started in 1909.

“Our current name does not capture the broad range of academic programs that we house nor the scholarly research that our faculty produce,” Ginsberg says. “The difficulty we had was identifying a name that reflects what we do while still keeping the name ‘education’ prominent.”

Among the reasons cited for renaming was the growth of the department of health, sport and exercise sciences (formerly known as the department of physical education), which now accounts for more than 60% of the school’s undergraduate credit hours.

A November survey of faculty, staff, students and alumni found strong support for the new moniker, which was chosen after considering what peer schools and colleges around the country are named. Overall 73% of respondents approved of the change, with alumni posting a 69.8% approval rate.

The Council of Chief Academic Officers and the Kansas Board of Regents OK’d the change in April. The transition will take place in phases starting this summer and concluding in fall 2020.

The CEO of a food service giant and the chief operating officer at a Big Four accounting firm were celebrated as the 2019 Distinguished Alumni by the School of Business this spring.

Tom Bené, b’84, chairman, president and CEO of Sysco Corp., has held a variety of leadership roles at the company, overseeing all business operations, commercial functions and supply chain organization. His volunteer service includes work with the Multiple Sclerosis Society, the United Way of Houston and the School of Business Dean’s Advisory Board. 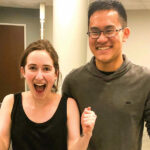 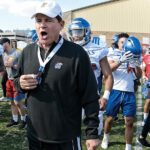