Native Hosts, a five-panel series by Edgar Heap of Birds, f’76,  (Cheyenne, Arapaho) on Oct. 14 returned with proper ceremony to the Spencer Museum of Art after vandals defaced four of the panels and the fifth was stolen. KU’s First Nations Student Association, University leaders and about 100 community members rededicated Native Hosts, which acknowledges tribes that historically or currently inhabit the region and serves as this year’s KU Common Work of Art. Professor Robert Warrior (Osage) described Native Hosts as an invitation to pause and consider the struggles of Indigenous peoples and acknowledge those who came before. 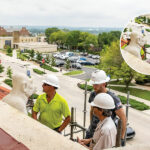 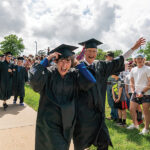 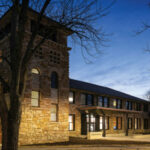 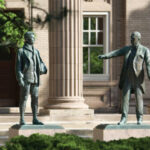