After Kansas Alumni ran a 2018 cover story on the “Rock Chalk Suite” written and performed by Wynton Marsalis’ Jazz at Lincoln Center Orchestra to honor 15 Kansas basketball legends and celebrate the Lied Center of Kansas’ 25thanniversary, readers called and wrote to ask, “Where can I get a recording?”

The answer: nowhere. Until now.

Later this month Blue Engine Records will release “Rock Chalk Suite, A Love Letter to Basketball from the Jazz at Lincoln Center Orchestra with Wynton Marsalis.” The $15 CD is available exclusively from the Lied Center March 23; preorders are being accepted now at lied.ku.edu/rockchalk.

The studio recording was made over three days in April 2019 at Jazz at Lincoln Center’s New York City headquarters, according to Derek Kwan, Lied Center director.

“In speaking with Wynton and the musicians after the world-premiere performance, there was a feeling among everyone that the music was so strong and the feeling was so strong it needed to be documented,” Kwan says. “It’s fantastic to finally see it in a place where many more people than those who were at the premiere can experience it. And with the [NCAA] tournament, we couldn’t have asked for a better time to release it.”

Five years have passed since Kwan (who was vice president of concerts and touring for Jazz at Lincoln Center before joining Lied in 2014) proposed the project to commemorate the campus performing arts center’s 25th anniversary. 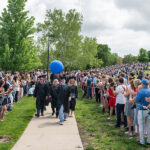 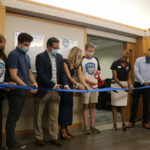 Online Only
Jayhawks go for golds
SHARE:
Online Only

online only
You may also like:
How the Jayhawk (helicopter) got its name